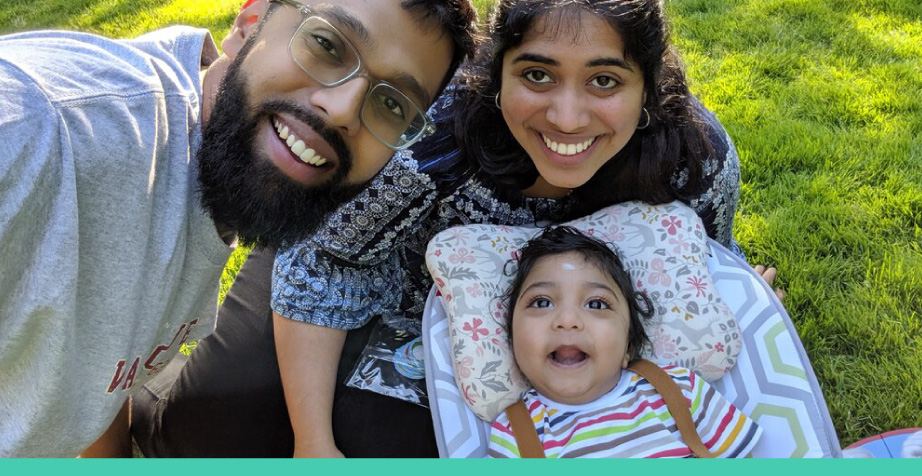 In our latest Speaker Series, we had the pleasure of speaking with Sanath Kumar Ramesh. Sanath is a computer scientist by background and works as a software engineer for Amazon’s healthcare division. He is also father to Raghav, who was born with an ultra-rare disease caused by a mutation in the GPX4 gene.

Sanath is the Founder and CEO of the OpenTreatments Foundation, a non-profit organisation seeking to improve rare disease treatment using a variety of technologies. Sanath joined us to discuss Raghav’s journey with his condition, and why he thinks decentralising drug development may yet hold the key to rare disease management.

Unassuming and amicable, Sanath’s life took an unexpected turn when he and his wife gave birth to their son, Raghav, in 2018. They knew something wasn’t right soon after he was born, as did the nursing staff in the intensive care unit, who became increasingly concerned with Raghav’s lack of muscle tone or responsiveness. The doctors arrived a short while later to confirm what Sanath had been worried about; “we think there’s something really wrong with your son”, they said, in hushed whispers late one night, “he might be wheelchair-bound, and never walk”. Sanath describes how he and his wife had been stunned into disbelief at this, as though ‘handed a death sentence’. He needed a tube inserted through his nose and down into his stomach for feeding, since he hadn’t developed the ability to swallow, and frequently suffered excruciating spasms of ‘electric shock’ like pain in his back. When his teeth began to come in, Raghav would often bite down on his tongue and injure himself, so severe he eventually needed his teeth extracted.

All the while, Raghav’s medical team were at a loss as to what was causing these myriad symptoms, until one sunny Seattle afternoon – the afternoon of his 1st birthday. As they were preparing to cut the Finding Nemo-themed cake, surrounded by their closest friends and family, Sanath received a call from Raghav’s doctor.

“We think we’ve found out what’s wrong with Raghav”, the doctor began, “he has a mutation in this gene called GPX4, that’s what’s causing all of his problems”.

“Okay, awesome”, Sanath replied, “So I’ll come by tomorrow to pick up the medication?”.

“Here’s the thing”, the doctor continued after a pause, “all of the kids with Raghav’s condition passed away a few weeks after birth. We think Raghav might be the only kid diagnosed with this disease”.

The GPX4 gene is one of the body’s important naturally occurring antioxidants, a mutation with which – as in Raghav’s case – can cause an array of symptoms including loss of muscle tone, problems with vision, hearing and swallowing, and developmental delays. Both Sanath and his wife contain a copy of the mutation too, but it’s an ‘autosomal recessive’ condition, meaning that two copies of the mutated gene are necessary for symptoms to be present. There are a scarcity of cases worldwide, and only a handful reported in the literature.

Since that telephone call on Raghav’s first birthday, Sanath has been single-minded in his passion for improving ultra-rare disease management, not just for Raghav, but for the vast numbers of children suffering with numerous rare diseases worldwide – individually rare, but collectively too common to continue to be overlooked. It began with a blog post in 2019, which Sanath wrote to share his story and aimed to crowdfund $10,000 to help with Raghav’s treatment. To Sanath’s surprise, the post went viral, and they ended up raising closer to $100,000. Sanath scoured the literature, even developing an algorithm to look for potential drugs that were out there that could be repurposed for Raghav’s condition. Eventually, he identified 36 drugs that could potentially be used in Raghav’s care.

Sanath shared his experience with one of these drugs – N-acetylcysteine – ordinarily used in paracetamol overdose and to loosen mucus in individuals with respiratory conditions, such as pneumonia. Just 48hrs after treatment with N-acetylcysteine, Raghav lifted his head up for the first time in 15 months. An X-ray taken shortly after showed marked improvements in Raghav’s skeletal structure. Sanath speaks to the support of his doctors in the ongoing prescription, monitoring, and oversight of these treatments.

A few months later, Sanath came across a small molecule drug, specifically for GPX4 mutations, and under the guidance of his physician, completed the Investigational New Drug (IND) application to request FDA approval. It took almost seven months for the drug to be procured, with the application going through several rounds of ethical approval and authorisation by hospital management. Sanath laments the length delay in accessing potentially life-saving treatments, particularly when time was of the essence for Raghav and other children like him.  “Even if he gets the smallest cold, he’s going to be in the hospital for several days… and he only gets a few passes at it, before his body’s going to give up”.

Sanath is almost rueful when describing the current state of play of accessing gene therapy, and is critical of the time delays, mistakes in gene therapy research, and the failure of the market and lack of incentives for the biotech industry to invest in ultra-rare diseases. He describes a Catch 22 scenario, wherein large organisations have limited cause to expend time and money into ultra-rare diseases; when they do pursue these ‘philanthropic’ avenues, fear of adverse events and the ensuing loss of shareholder confidence hampers them from moving forward at scale.

It was this disgruntlement with the status quo, that led Sanath to found the OpenTreatment Foundation. The foundation is a non-profit organisation which aims to leverage its OpenTreatment software to enable treatments for all genetic diseases, regardless of prevalence or geography. Their mission is to decentralise drug development and empower patients and their families to create treatments for traditionally neglected diseases. The software is an end-to-end project management tool, and produces a roadmap by which to support patient foundations to access potential therapies. The foundation will work closely with commercial, government, and philanthropic entities to facilitate uptake and access to these treatments around the world.

To find out more about the work the OpenTreatments Foundation are doing, head to their website here.

To follow Raghav's journey, or to make a donation to his cause visit curegpx4.org.

To reach out to Sanath, you can connect with him via Linkedin.